Drawing/Rendering Competition for the Aurora, Excalibur, Enterprise, and Huáscar 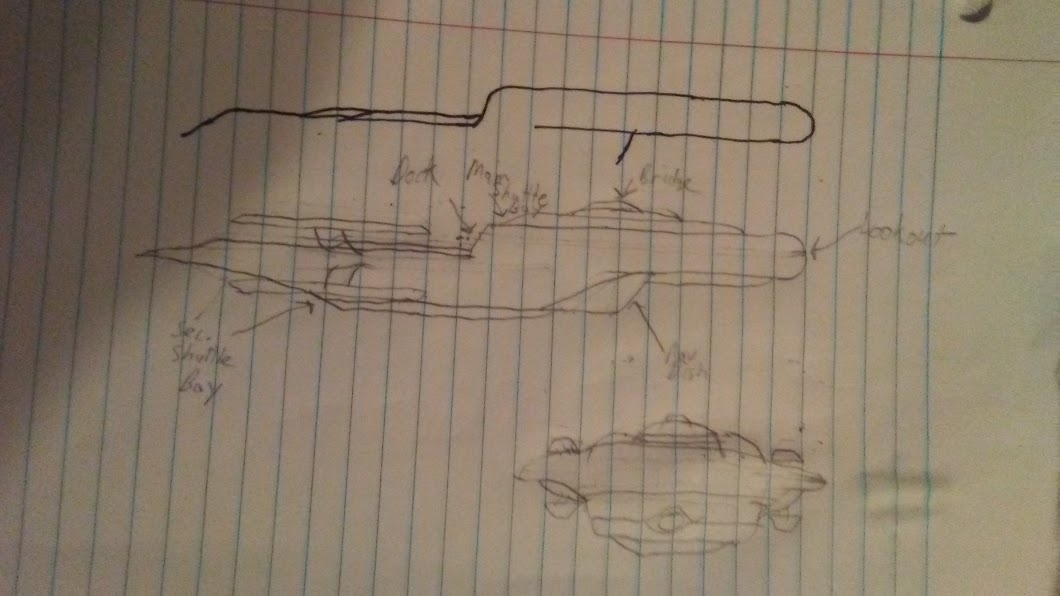 @Big Steve created this hand drawing of his Aurora from his utterly massive, epic, TV-show style Undiscovered Frontier, and my own tie-in, Origins. I want something better to visualise the ships with, so this is a challenge to create a rendering or drawing that makes @Big Steve happy. However, this is the Aurora. When you create the Aurora, a multi-mission heavy cruiser; you will need to modify that drawing to depict the related Excalibur class of battlecruisers, the Enterprise class of multi-mission heavy cruisers (think of the Aurora as a prototype with significant differences) and the Huáscar subvariant of the Enterprise with enhanced aviation and aviation control spaces. In exchange for this you will get a one-year Osaul subscription if your design is the selected one. You only need to design the Aurora to compete and win, but to get your prize you then have to make the three variant renderings.

For the record, it's supposed to have curving lines like some of the later TNG-era Starfleet ships, or the STO star cruisers. But I've never been one for the visual arts.

The important thing is no neck. The front of the "drive" hull and the attendant deflector are only a quarter of the way down the ship's length, roughly below the bridge, and the primary hull ends at about the halfway point. So you've got 250-300 meters of contact area between the two sections, entirely unlike most other Starfleet designs (Star cruisers from STO are more like single hull ships).

Anyway, here's a bit I wrote in one of the episodes that compares the Aurora to Starfleet vessels as part of the description. It should help fill in details my inability to draw properly left open:


Shining in the light of an alien sun, the Alliance Starship Aurora maintained a geosynchronous orbit over the planet Cestus 3. A Federation Ambassador-class starship, the Tucker, was to the Aurora's starboard side, while a blockier, single-hulled Gorn warship was to port. One could notice some vague similarities in the layout of the Federation and Alliance ship, principally with the layout of a primary hull and a drive hull with a bow-mounted navigational deflector dish, with the warp nacelles attached by pylons to the sides.

There were clear design differences, however. The smaller Federation ship's primary hull was a saucer attached by a clear neck to the round drive hull. The kilometer-long Aurora's primary hull, while wide proportionately as well, had a long shape to it, closer to an arrowhead than a saucer, and the drive hull started much further up, directly connected to the primary hull with the deflector dish only about twenty-five percent of the way down the ship's length and almost directly below the location of the main bridge at the top of the primary hull. The two hulls shared a wide and long connection area, flowing together without any visible neck. The rear end of the primary hull was marked by a drop in height of over fifty meters. Toward the top of this drop was the main shuttle bay for the ship while, below it, was the armored dock for a supporting attack or scout ship; in this case, the Starship Koenig. Below this dock, at the top of the drive hull, was the recovery deck for the Aurora's starfighter wing laid over the hanger deck and its attached launch tubes for the eighty-eight Mongoose starfighters of the vessel.

The drive hull itself started to extend down to the ship's lowest thirty-third through thirty-fifth decks aft of the deflector dish, providing additional machinery spaces and the decks used by the ship's company of Marines, with the secondary shuttle bay at the rear of Deck 32 towards the stern. Four long, sleek warp nacelles with bright blue ramscoops and drive coil sections were arranged in a flat X shape around the drive hull, just far out enough to give their hydrogen-collecting ramscoops clearance around the hull.
Click to expand...

So, yes, Steve's description is important too. But I am serious -- this should, hopefully, be a competition!

Just a bump in hopes of replies, elsewise might need to sticky this somewhere.