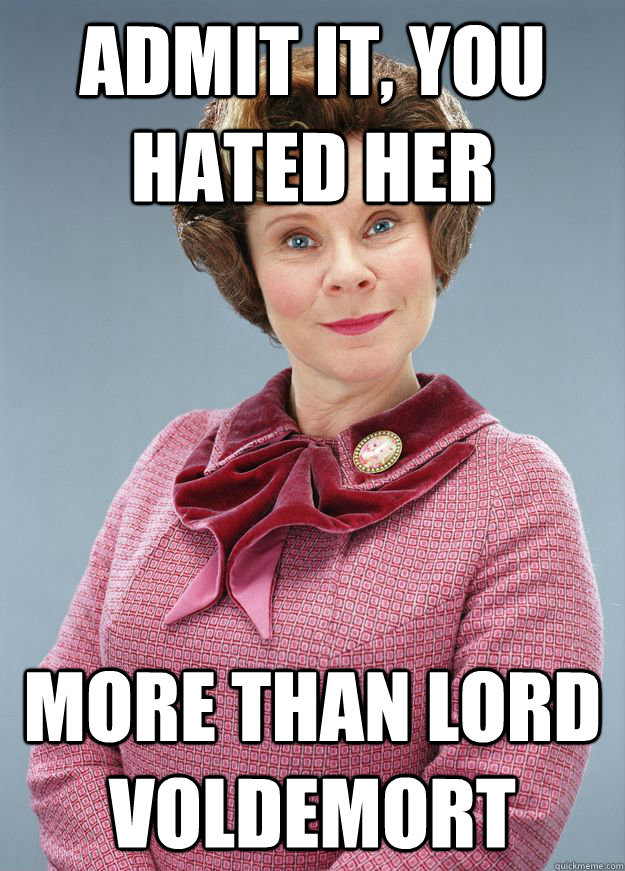 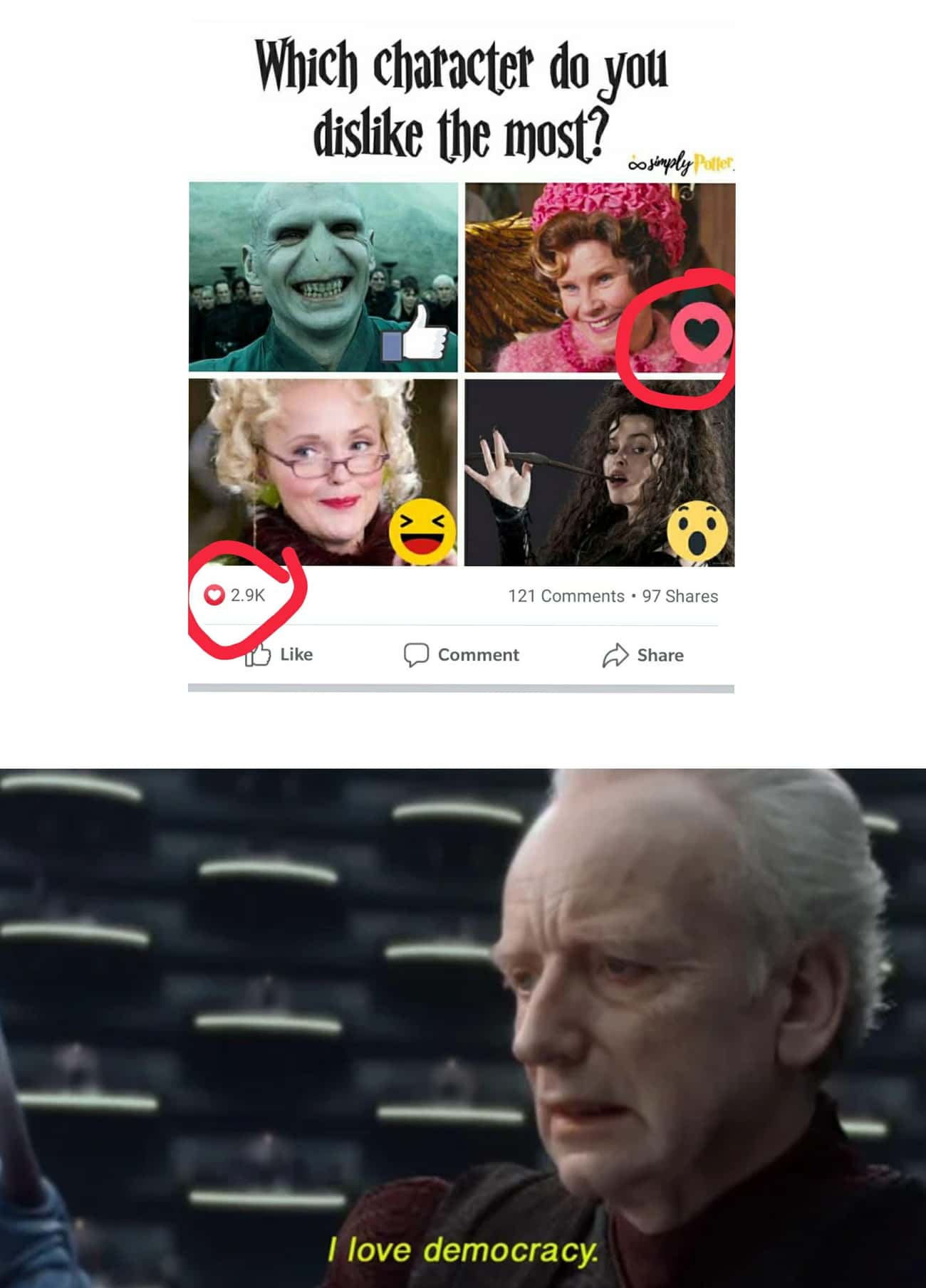 Because I am an extremely petty individual, I have decided to initiate a series of black-humored prompts involving at least a thousand different ways that this toad can die!

My only rules for this thread at present are to keep in mind rule 1C in short don't go overboard with it. We are making this for carthartic light-black humor not to pointlessly disturb or sicken the rest of us by getting into extremely gorey and sadistic content

Similarly, I am also putting up the reminder of rule 1F and 2G in regard to the actor that portrays Umbridge in the movies, Imelda Staunton is a nice person and a good actress in RL and while I doubt it will happen, I want to remind people that Umbridge is a character she portrays and any attempt to harass or bring her or any other RL individuals into these prompts to kill them in anyway will result in staff coming down on your ass with the full authority of our office.

But besides that, have fun!

(BTW that image made me realize that Sheev Palpatine and Dolores Umbridge are now my OTP for most cringiest couple I could see working in fiction.)

1: Kick her down the moving stairs from the top.

2: Trap her in a Disappearing Cupboard. Forever.

4: Hit her with a Body Binding Spell and dump her in the lake.

Dolores couldn't contain her annoyance as she dealt with rushed from her office and saw those pathetic Weasleys flying around on brooms dressed like the misbegotten blood traitors they were...

All of a sudden, she saw a flicker of movement out of the corner of her eye, glimpsed a sparkle and heard a bang before as she felt something slam into the side of her face before it all slipped away.

Everyone who had initially been watching the Weasleys stunt, Argus Flich and the Twins themselves who suddenly lost control of their brooms and fell to the ground looked on in stunned horror at the now lifeless remains of the former headmistress.

Dolores giggled lightly to herself as she looked down at the filthy mud blood below being dragged in, this was now her this was now her favorite part of the job, she wasn't ignorant as to the takeover of the government, but these new policies were to her liking.

As she read off the charges and Mary Cattermole begged her already decided case, which she felt nothing but pure euphoria at being able to conduct, the power was exhilarating.

All of a sudden though it went wrong she didn't know quite how or why though until she hit the ground still aware she had been stunned and felt her locket fly accompanied by a familiar voice.

"POTTER!" She thought as she tried to break free and take vengeance on the brat who had cast her reputation to the gutter.

And yet she couldn't move even as she looked on in horror as one of the dementors broke off from the rest who were chasing potter and floated over while she attempted to scream.

Dolores screamed as she ran from the charging centaurs all of a sudden though her feet caught a root and she splayed to the forrest floor landing on her wand with a loud crack.

"No." She thought as she turned over onto her stomach and saw one of the centaurs which hadn't noticed her fall leap over a bush and right towa-

The centaur heard a loud crack against his hooves as he landed on something protruding from the ground and spun around to see a gruesome sight one that spelled his herds probable doom when the wizards got wind.
Last edited: Apr 25, 2022

Not too familiar with Harry Potter magic. Here's some more mundane causes which could be the result of "a wizard goofed" or "someone had it in for her"

8: an unfortunate encounter with a running aircraft engine

Have you considered what happened to her in canon?
She gets gang raped by centaurs 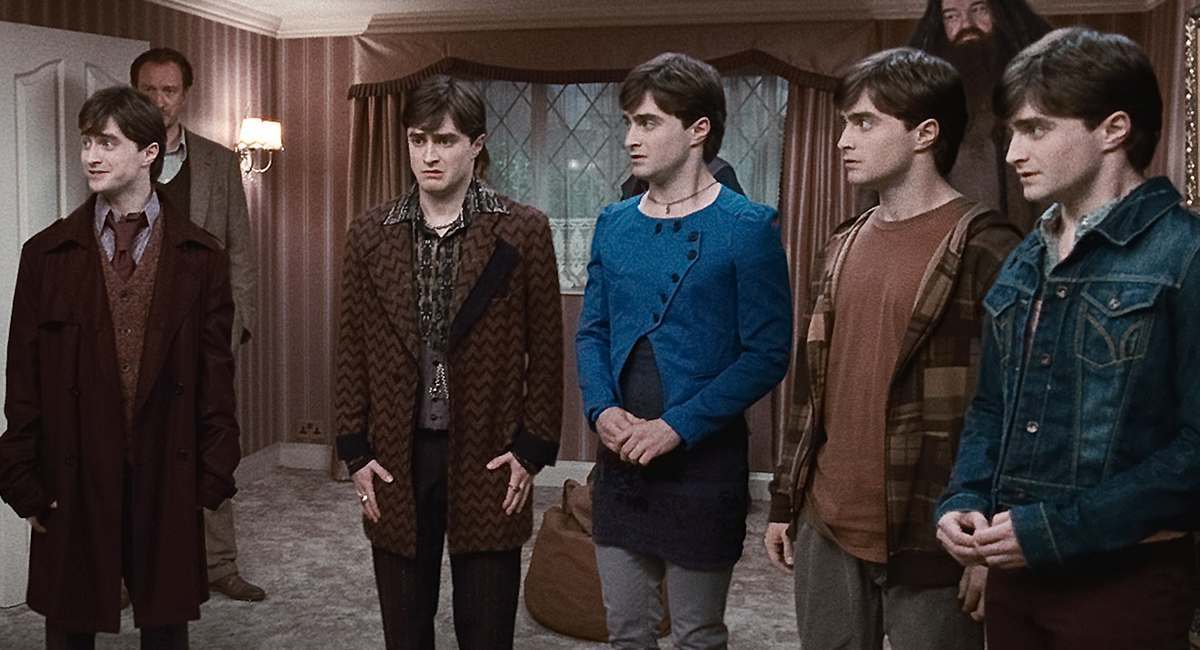 The Most Depraved Sex Scenes Implied by 'Harry Potter'

If you clicked on this article expecting five Harry/Draco fanfics, prepare to be disappointed.

mrttao said:
Have you considered what happened to her in canon?
She gets gang raped by centaurs

The Most Depraved Sex Scenes Implied by 'Harry Potter'

If you clicked on this article expecting five Harry/Draco fanfics, prepare to be disappointed.

...Listen I know Umbridge is hated but this is going above and beyond the purpose of this thread as I planned it, we are all writing 'death' in the sense of light hearted black humor so don't even think to make jokes or bring up this type of thing even as a theory again...ever...especially when it isn't canon.

And that goes for everyone else in this thread, this is my final warning.
Last edited: Apr 26, 2022

The curse of all wizards that spells shall return to their casters three-fold. All those times she tortured children comes back to hit her all at once...in triplicate. Heart attack I'm thinking.

Totally NOT Potter'verse canon, but I like the idea of it.

Just have an Ordo Maleus fleet find its way to the Potterverse's Earth.
That will fix your Umbridge problem in a very amusing way.

This is an ancient fic I wrote long ago that might work here: